"Millions saw the apple fall, but Newton was the one who asked why." - Bernard Baruch 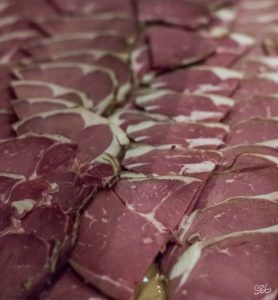 It is not a surprise that one of Iceland’s most popular festive dishes includes lamb. Iceland’s sheep population is more than twice as large as it’s human population. “There are about 800,000 sheep in Iceland and only about 323,000 Icelanders” (Unlimited, Iceland). Hangikjöt, translated as “hung meat”, is a dish that requires delicate preparation. Traditionally it is made from lamb due to its unique taste, but it is not uncommon to find Hangikjöt made from mutton, or horse meat. It’s name comes from the way the meat is prepared which involves smoking it for long periods of time with Icelandic birch or dried sheep dung, giving it its original taste. More recently Icelanders have started eating tvíreykt hangikjöt, which translates to “twice smoked hung meat”. This hangikjöt has been smoked for longer, and is “more like the old country hangikjöt which often hung high above the kitchen fire for many months” (“Hangikjöt”).

Hangikjöt, despite having no religious meaning, is traditionally eaten by Icelanders over the Christmas holidays. After the traditional Christmas meal, leftover hangikjöt is often used on Icelandic flatbread, or in sandwiches. (“Traditional Icelandic Christmas Food”). As mentioned previously, hangikjöt can also be made from horse. As discussed by Dr.Stamant and Dr.Paul, there are a lot of cultural differences involving food. There are dishes and ways of producing/consuming foods that some cultures may find socially acceptable and even enjoyable/beneficial, while others bizarre and almost taboo. The consumption of horse meat in Iceland is not only common but a traditional delicacy. American culture however, may find this very bizarre and even unethical. The commonality of human interaction with horses, makes it socially unacceptable to consume them. From a globally cultural perspective it is safe to say that despite having differences in moral beliefs, not one perspective on food is right or wrong.

One of the reasons Icelanders like this dish so much is because of the way the sheep are farmed. Unlike in Iceland, the meat industry in America revolves around the quantity of meat as opposed to the quality, in means to obtain the most profit. In addition to excessive breeding, American factory farms use vast amounts of hormones on the animals to make them larger. As people have become used to consuming these products, they’ve become unable to taste a difference between processed and unprocessed meat. For this reason they will often buy the cheapest meats (despite the way it is produced), further helping these companies become richer. As people become aware of these conditions however, companies find new ways to make their foods more desirable. As talked about by Dr.Perdue, people (57%) in America, will likely spend more money on foods (mostly eggs) that are said to be organic, or cage free. For more profitable reasons, companies will often times include words and even colors or symbols on their product’s packaging that make others believe they are healthier and better for the environment, when in fact they aren’t. The way that meat is produced in Iceland however, revolves around its quality. The sheep to make hangikjöt are farmed in an old fashioned way: free to roam around the wilderness of unspoiled highlands all summer without any supervision, and graze on grass, plants and herbs which contributes to their rich flavor (“The 5 Best and 5 Worst Types of Icelandic Food”). Without the use of hormones and other chemicals in the meat’s production, Icelanders are not exposed to their dangers. As all the meat is organic and farmed the same, it is unlikely to see a vast difference in price. Therefore, Icelanders consume the purest meat without added chemicals/preservatives, giving them the healthiest options.

As mentioned by Dr.Perdue and greatly talked about in the film Cowspiracy, animal agriculture is one of the leading causes of water waste, deforestation, and global warming. Additionally, factory farming in the U.S doesn’t prioritize animal welfare. Not only does the way American companies farm animals have detrimental effects on our environment, but the treatment of these animals is unethical. In contrast, Iceland’s distinct method of farming allows for higher welfare conditions for the animals. As mentioned, the sheep farmed in Iceland, as opposed to animals in America, are free to roam, and fed an appropriate diet. In doing so, Icelanders are exposed to healthier foods, the environment poses less threat, and these animals are treated fairly, producing better tasting meat.

When I first arrived at Agnes Scott, my perception of leadership was slightly different from what is is now. Throughout the course, I’ve learned about leadership both by first-hand experience in the assignments we’ve completed, and through the course readings. Before taking this course, my perception on leadership was such that a “good leader” is supposed to possess qualities that will enable him/her to influence others in a positive way. After one of our first assignments which was to elaborate on “Only Connect… : The Goal of a Liberal Education” by William Cronon, my outlook on leadership began to expand as I started to understand leadership from a liberal arts perspective. This essay clarifies the meaning and importance of a liberal arts education while emphasizing its core values. Cronon expresses that a true liberal education “aspires to nurture the growth of human talent in the service of human freedom”, and likewise, truly liberally educated people “have been liberated by their education to explore and fulfill the promise of their own highest talents.” Cronon then proposes the idea that an institution should focus predominantly on generating a list of personal qualities that embody the values of a liberal arts education. In doing this, an institution yields a more successful making of liberally educated students. Having the well-roundedness that a true liberal arts education offers is crucial to a leader, both academically and socially. Having people that model a liberal arts education in our society, will in turn result in a more productive and diverse community. For this reason, I chose to become part of a liberal arts institution, as I like Cronon believe in the importance of a diverse teaching approach. Part of being a well-rounded individual, is also understanding other’s beliefs and ideas. In the “All About Me” assignment I was given the chance to share something that represents who I am as well as listen to what others find representative of themselves. This exposure to differing perspectives was eye opening in the sense that I was able to see the way people perceive themselves and what they find important or valuable. In addition to these assignments, readings about the atomic era have also contributed to my new perception on leadership. The book we read “The Girls of Atomic City”, highlights the many struggles women in the Manhattan project faced as they contributed to the victory of WWII. One of these women, like myself moved from the northeast to the south. Although this change was dramatic, we both made a similar sacrifice for something that was important to us would contribute significantly to our futures. Such act shows great leadership in the sense that one must look beyond these challenges in means to find their own kind of success. In reading about such obstacles these women had to face, I became even more aware of different types of leaderships. This ability to persistently work towards an objective despite the difficulties of the times and lack of proper recognition, shows a level of leadership beyond one I’m familiar with. One of the class’ last assignments involved evaluating and classifying one of two important figures of the Manhattan project in their style of leadership. In this assignment I leaned significantly about positive and negative types of leadership and that perfection is not needed to lead efficiently. For example, J. Roberts Oppenheimer who despite having a rough childhood, an emotional character, and a sometimes prominent rude attitude, was an exceptional leader and physicist who in addition to influencing others and leading a team of scientists to war victory, made significant contributions to science during the atomic era. Although many of Oppenheimer’s leadership qualities can be seen as “negative”, ultimately used them wisely and lead his team to war victory. Oppenheimer was not a perfect leader in the sense that he did not possess qualities such as humility, empathy, and selflessness, which I initially thought were qualities one needed to posses in order to be considered a “good leader”. After having read several texts however, I observed that this lack of usually favorable qualities did not undermine his ability to lead efficiently. In fact, his superficial lack of vulnerability showed people “not to mess with him”. This allowed for proper order in his specific department and for a sense of urgency and importance to be taken with the project. People lead in different ways under different circumstances, and despite this difference in styles of leading, success can still be achieved. Oppenheimer’s type of leading was effective in this scenario but may not be acceptable in others. This understanding of variety of leadership, changed and expanded my perception of effective leadership. Having leadership diversity amongst a society is what makes it an effective environment for beneficial outcomes. As a result of learning all new perspectives on leadership, my capacity to lead has become stronger and it is my hope that it grows in the years to come.

Nothing will bring George Floyd back to life. There’s nothing to celebrate in a jury doing its job in finding Derek Chauvin guilty. But in a country where police are rarely held criminally liable for murdering people, especially Black and brown people, this moment matters.

The jury's verdict delivers accountability for Derek Chauvin, but not justice for George Floyd. Real justice for him and too many others can only happen when we build a nation that fundamentally respects the human dignity of every person. https://twitter.com/AP/status/1384616336899313667

Floyd’s death stirred worldwide protests against racism after video showed Chauvin pinning Floyd to the ground with his knee on his neck.

BREAKING: Derek Chavin has been found guilty of second and third-degree murder and manslaughter of George Floyd

When I applied for my PhD I was rejected from every program. One faculty member told me I would never be a community engaged researcher or complete a PhD program b/c of my GRE scores. They weren’t great but I did well in my master’s prog.

Seat belts save lives. Should they be optional at low speed because the risk is lower?

We can always stop the car to buckle up as soon as speed exceeds 30 mph, right?